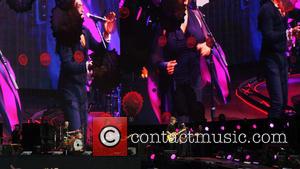 Rolling Stones star Ronnie Wood and the man he replaced in the band, Mick Taylor, appear to have formed a new supergroup after hitting the stage together for an exclusive gig in New York on Thursday (07Nov13).

Taylor joined Wood and his band onstage at the BluesFest in London at the beginning of the month (Nov13) after becoming fast friends with his Stones successor on their 50 and Counting Tour, during which the group's former guitarist joined his ex-bandmates for parts of their show.

And it seems the get together has become so much more - Wood and Taylor joined veteran musicians Al Kooper and Simon Kirke at New York's Cutting Room for one of the Big Apple's hottest tickets this week.

Fans including The Kinks star Ray Davies paid up to $300 (£200) to pack into the venue to see the new group's first official U.S. gig.

Among the old rockers' set list was one Stones track, Can't You Hear Me Knocking, and a host of blues classics from their heroes like Jimmy Reed.