Promotional Artwork For A New Exhibition Of Rolling Stones Memorabilia Has Been Banned After It Was Deemed Too Saucy. 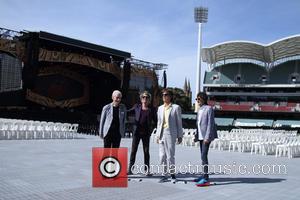 The suggestive image for the London show, which is due to open next year (16), features the group's iconic lips logo plastered over a picture of a woman's hips and groin.

However, regulators who monitor advertisements posted on the London Underground travel system and bus shelters in the U.K. capital have banned the advert from appearing in its current form, so the rockers have decided to move the logo from the woman's groin to her belly button.

A spokesman for the band says, "We are dumbfounded and perplexed at this rather silly decision. Perhaps the fact that it's the Rolling Stones and controversy seems to follow them everywhere."

A representative for advertising company Clear Channel adds, "When we saw the artwork we suggested to the client that it may not be approved in its current form and they revised the artwork, shifting the mouth slightly further up the body. This decision was reached quickly and amicably."