On April 23rd, 1971, The Rolling Stones released their ninth, and arguably their best album, 'Sticky Fingers'.

Way, way back when Mick Jagger and Keith Richards were in the prime of their life, at the ripe old age of 27, the pair of them, together with fellow band mates Bill Wyman, Charlie Watts and Mick Taylor, released The Rolling Stones ninth (UK) album, Sticky Fingers. In 1971 The Stones set about a new chapter in their life by reverting to type and doing what they were best at; Bluesy Rock with a little twist of chic sleaze. Mick and the band, now without their founding member Brian Jones, who tragically drowned in his own swimming pool shortly after being sacked from the band, had a certain freedom that they had not been afforded before. As the 70's began The Rolling Stones were able to release music on their own label, they were free from the ties of record label Decca as well as former (Thorn in their side) manager Allen Klein, and they were, at least according to their own hype, "The greatest Rock 'n' Roll band in the World." 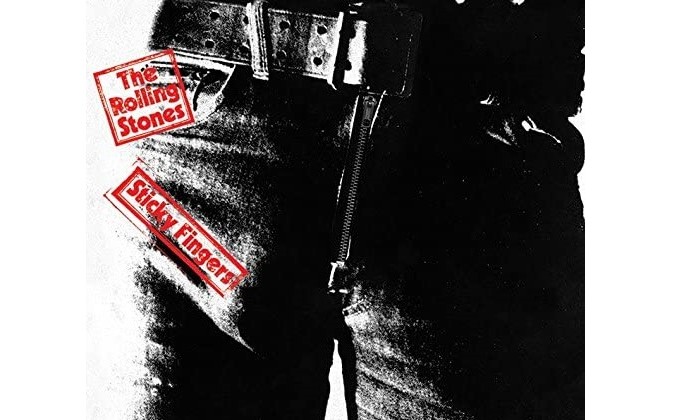 As the stars aligned once more for The Rolling Stones they delivered one of the best (If not the best) albums in their illustrious careers. Sticky Fingers was, and is, a ten track album that highlights just how good The Stones are at their raw and riveting best. The dark and brooding fabric of the album is part of it's cohesive beauty. Sticky Fingers not only contains some of The Rolling Stones best material it's also is a testament to the album format in it's entirety. The sequencing is faultless, who wouldn't be immediately engaged by the killer riffs and immaculate percussive passages of Brown Sugar, and who couldn't be left asking for more after hearing the remarkable, reflective and almost religious close out track, Moonlight Mile.

Of the ten tracks contained on the original album only one was released as a single in the UK and two in the US, although if you include the B-Sides this would actually be four of the ten tracks. When you look back at this now, and consider how albums are front loaded, singles are pre-released ahead of the album proper, and just how many singles are released from contemporary albums, this seems incredible given the quality of Sticky Fingers.

The now signature Rolling Stones tune, Brown Sugar, was released as the lead track one week ahead of the album, peaking at number two in the UK but reaching number one in the US. (Brown Sugar was coincidentally also the first release on the Rolling Stones Records label). The Stones performed the track on Top Of The Pops; captured in an enthusiastic performance that was broadcast on April 15th and May 6th. Mick looks particularly fetching in his double-breasted pink satin suit, baseball cap and sneakers.

The first track on side two of the album, and the flip side to Brown Sugar, Bitch, is a track that Mick says is a "guitar song, but it is somewhat dependent on the horn line, there's a very heavy horn line on it...but I think it really rocks this track." There were concerns that Sticky Fingers as a whole contained too higher mix of slow songs so the inclusion of the pumping, horn enhanced, live staple, Bitch was a given.

The second single to be released from the Stones ninth album was Wild Horses, an "acoustic ballad" that was originally conceived by Keith, and then developed further by Jagger and Richards into the tender and vulnerable track that it became. The emotive song had been captured "quite quickly" more than a year before at Muscle Shoals Sound Studio in Alabama and is without doubt not only a highlight of this album, but a standout Stones track from their entire catalogue. Mick's measured and restrained performance coupled with the interlaced guitars of Richards and Taylor is a delightful combination.

You Gotta Move, the only track on the album not written by Jagger and Richards, and Sister Morphine, were also recorded in the same sessions that gave rise to Brown Sugar and Wild Horses. The former embraced a Deep South, Blue Grass sensibility in it's stripped back arrangement whilst the latter, a song co-written with Marianne Faithfull, takes a similar route to Wild Horses but with a distinctly mellowed out and woozy atmosphere befitting the lyrical content of the song.

Given that The Rolling Stones have produced some of the most iconic popular music of the last 60 years it is difficult to call out their seminal record. The tracks, (I Can't Get No) Satisfaction, Paint It, Black and Sympathy For The Devil are all worthy contenders, as are the albums Beggars Banquet, Aftermath, Let It Bleed or even Tattoo You, however Sticky Fingers is in a way the definitive package. It's a well balanced set of extremely good songs, showcasing the incredible writing partnership of Jagger and Richards. The recordings capture a band at their ultimate best, not trying too hard, not guilty of over producing, capturing the essence of the songs in early takes and playing with an artistry that is near faultless in it's delivery. All this, and, it's wrapped up in a sleeve that was conceived by Andy Warhol. How could you not like it? A very happy 50th birthday, Sticky Fingers.