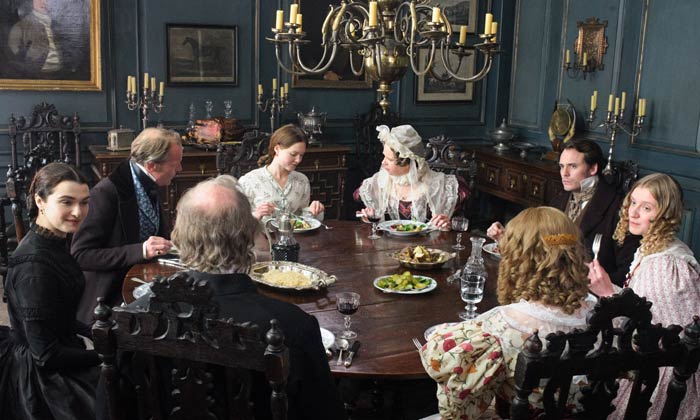 Philip is a typical young English gent, except that he has a deepening desire for revenge burning in his heart. He believes that his strangely dark cousin Rachel Ashley has killed his guardian Ambrose for his money, only it's Philip that receives the inheritance in the end, not Rachel. When she arrives in England, Philip accepts her warily into his home, but despite all evidence against her, he can't help himself falling for her beauty and her grace. She's clearly an intelligent and deceptive woman, and everyone else can see that she is only charming Philip to achieve her own selfish ends. But it really doesn't matter how much he is warned about her by those closest to him - particularly Louise Kendall - he's only falling deeper under her spell.

Meg and Nick are a seemingly devoted couple who venture to the romantic city of Paris on their thirtieth wedding anniversary in the hope of rekindling old feelings from their honeymoon. They may claim to love each other, but things are far from perfect in their relationship as their routine lifestyles have caused a dramatic rift between them without them even noticing. Their weekend is tainted by frequent arguments, though always warmed by frequent displays of affection and childish exploits. However, when they bump into old American friend who invites them for dinner at his Parisian apartment, they start to feel depressed that their lives are several shades less colourful than his with his gorgeous pregnant wife, success in the city and an impressive book deal. Will this long-devoted couple find peace within themselves to be content with one another? Or will Paris cause them to finally drift apart?

At The Movies: Hyde Park On Hudson Review Roundup

Deciding what to go and see at the pictures this weekend? Already seen Lincoln, Twilight, Skyfall, to name a few? Well, Hyde Park On Hudson is released tonight (Friday, 7th) and we've had a look at some reviews to make your life a little easier.

The good news is that we've made your decision for you, the bad news, for Roger Michell, who directed the film, is that it's enduring a pretty tough time with the critics. "Roosevelt was one of the towering figures of the 20th century, but he and his accomplishments scarcely register in this amorphous, bafflingly aimless movie," say The New York Times in a scathing review. "We can accept that F.D.R. was a charming cad, but if he weren't a great deal more than that there would be no reason to put him at the center of a movie," say another publication from the Big Apple, The New Yorker, while USA Today condemn the film as boring, saying, "A romance that grows out of admiration over a stamp collection is about as boring as it sounds."

It doesn't stop there: "I wish I could say that Bill Murray's performance as FDR was so wonderful it transcended the material, but the truth is that Murray's character never fully emerges from the fog," say Slate, and Village Voice wrote, "It's dispiriting that a film about the romantic life of Franklin D. Roosevelt, who cultivated a small coterie of mistresses, should exhibit so little interest in what engaged its hero..."

'Hyde Park On Hudson' is the story of the 32nd President of the United States Franklin Delano Roosevelt and his growing love affair with his soon to be mistress Daisy. In the summer of 1949, Roosevelt decides to invite the reigning monarchs of England King George VI and Queen Elizabeth over to America for their first ever trans-Atlantic trip - incidentally, the first trip to America any English monarch has ever made. The President's friends, colleagues and family rally together to create a fun and interesting weekend for the Royals despite their unfamiliarity with proper royal protocol such as knowing the proper way to address the King and Queen. Nonetheless, the royals remain polite and do their best to cover up their nervousness and lack of experience of American culture as war with Germany is imminent and they may need someone to turn to.

This partially biographical and downright comical drama has been told in the shoes of Daisy and takes place only months before World War II broke out. 'Hyde Park on Hudson' has been directed by Roger Michell ('Notting Hill', 'Changing Lanes', 'Morning Glory') and written by Richard Nelson ('Ethan Frome') and is set to hit cinemas from February 1st 2013.

Working in television is a cut-throat industry, keep your figures up or get out. After losing her job on a local news show Becky Fuller finds herself at a loose end. Far and few opportunities arise for her until she's offered the job of producing a morning television show called Daybreak.


Roger Michell - Interview Roger Michell
15.04.05
“The sun, the crows, the blackbirds, the sheep. This body with its guts hanging out.”

Roger Mitchell directed the UK’s most commercially successful film – Notting Hill – making him one of the most sought after professionals in the business. His version of Ian McEwan’s best-selling book “Enduring Love” is a masterpiece of adaptation. One magazine presented it with ‘scene of the year’ for the terrifyingly stunning opening sequence, which many fans of the book could not imagine translated to screen successfully. Contact Music caught up withMr. Michell in ‘The Bond room’at Premier PR to learn more about the dramatic opening, Jed’s craziness and why he wouldn’t make a film in Syria…

I was very impressed with the film, best film I’ve seen for a long time.

Reminded me of Hitchcock, the tension. What techniques did you use to keep that tension going?