Review of The Impossible Song & Other Songs Album by Roddy Woomble

'A New Day Has Begun' is a full on folk stomp right from the off; with an emphatic bass line pounding out the beat together with drums, banjo, mandolin, violin lines and all, the thirty-six second introduction builds layer by layer before Woomble's distinctive vocals enter. Harmony and structure are simple, predictable even, but there's no denying that the opening track to Woomble's next solo endeavour is a catchy and well-produced number with hopeful lyrics sounding clear over layers of lots of typical folk-type instruments and the pounding bass line that continues throughout; good start. Roddy Woomble is better known as the front man of Scottish alternative rock band Idlewild, a band that formed way back in 1995. Alongside several successful albums and tours with the constantly musically metamorphosing yet consistently superb Idlewild, Woomble began to further explore folk music working with a host of renowned folk musicians; The Impossible Song & Other Songs further explores this now familiar territory through a 12 track effort that also drags in lots of other influences along the way. 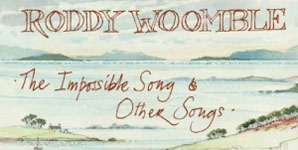 Immediately contrasting the opening track, 'Make Something Out Of What Its Worth' begins with picked acoustic guitar providing gentle accompaniment to Woomble's solo storytelling vocals. The track has an easy going feel with brushed drums and simple V-I bass line, much more laid back and sparse than that which preceded it with gentle glimmers of bluesy piano throughout the latter half of the song leading into a brief clarinet solo which continues to meander through the final verse. 'Work Like You Can' opens in a similar gentle state of mind with female vocals, accordion and strummed guitar sounding a delicate introduction before Woomble's vocals enter followed by drums which trigger a gear change into a much fuller chorus beneath both male and female vocals. The track then breaks into a beautiful echoing fiddle solo, almost a substitute for guitar solo. Ability to build from gentle beginnings is also evidenced in 'Tangled Wine', which opens with picked guitar and clear vocals; every word is well enunciated and audible. Gentle female backing vocals also sound a beautiful smooth tone in contrast to Woomble's edgier, former rock band vocal, before the track builds to a fuller conclusion with piano, drums, bass et al.

Later in the album, the swing jazz feel of the sax-led 'Roll Along' sounds a catchy chorus that's obviously distinct from verses, with a bright, poppy, upbeat feel throughout leading to a big instrumental outro; piano meandering around the blues scale beneath layers of saxophone harmonies. This is a style that's completely contrasted by that which follows; 'Hour After Hour' hints at a fuller band feel, building and fading between a gentle acoustic sound and a more determined electric guitar and drum fuelled sound, before 'Leaving Without Gold' further elaborates on these suggestions making way for a fuller band sound more reminiscent of Woomble's Idlewild days rather than the multitracked layers of folk on the majority of other tracks.

Its tracks where Woomble hasn't been reluctant to experiment that work better, rather than the likes of 'New Frontier', 'Living As You Always Have' and 'Gather The Day', which are the more bland, plain tracks on the album, especially when tracklisted either side of the grunge-tinged folk track 'Old Town'. Out of a ground of delicate picked guitar, 'Old Town' grows into a reflection of Woomble's inner Idlewild, with fuzzy electric guitar crunching in to sound an anxious, foreboding feel echoed in Woomble's distorted vocals. This sound is contrasted by more gentle passages of picked guitar-accompanied male and female vocals before the tougher, rougher sound returns. Drawing together everything that preceded it, 'Between The Old Moon' concludes the album, and, out of a slow, heavily reverbed introduction, sounds a pounding bass line over which various melodies ramble. The track also sounds Jan Garbarek-esque atmospheric sax blended with an Idlewild-like growling rock pulse which gradually builds almost in a post rock fashion.

Though perhaps born out of folk intentions, discard the few fillers and Roddy Woomble's The Impossible Song & Other Songs is a strong, well produced album filled with much variety and experimental fusion.