A U.s. Reality Show Starring Rod Stewart's Kids And Ex-wife Alana Has Reportedly Been Axed After Just One Season. 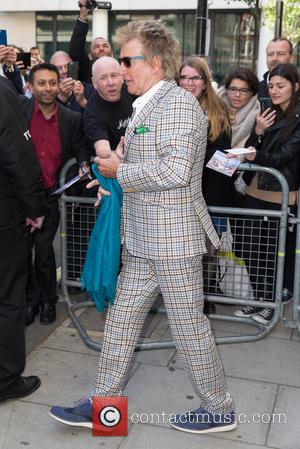 The E! network show, Stewarts & Hamiltons, featured Sean and Kimberly Stewart, Rod's two grown-up children with his first wife, and Ruby, the rocker's daughter from his relationship with Kelly Emberg.

Alana's ex-husband, actor George Hamilton, and their son Ashley also made appearances during the first eight episodes, but TV bosses have reportedly decided not to renew the series due to low ratings, according to the New York Post's Page Six column.

However, an E! representative insists the Stewarts and Hamiltons may be back on air in another capacity.

"We recently wrapped the eight-episode first season of Stewarts & Hamiltons and we're exploring other opportunities to work with the family," the publicist writes in a statement.

Rod, who made a cameo in the pilot episode, recently confessed he wasn't a big fan of the series.

"They're enjoying themselves and that's what counts, but I'm cringing sometimes," he told Rolling Stone magazine.

Stewarts & Hamiltons often featured tense family clashes, particularly between Kimberly and her mother Alana, and the drama spilled over into their promotional interviews for the show.

During an appearance on U.S. news show Access Hollywood Live in July (15), Alana Stewart confessed the pair had "not spoken for two days".

"We have a knock-down, drag-out fight in the car on the way to the airport in New York and this is the first time we've seen each other and talked in two days," she explained.

Daughter Kimberly insisted, "We're still not speaking actually...", and when the feuding mother and daughter were urged to "make up" and "hold hands" on live TV, the 36 year old shot back, "We're not there yet. We're making eye contact."

The pair refused to reveal what the fight was about, stating, "It's a long story", but Alana added, "We push each other's buttons... I'm a Taurus, she's a Leo."

Representatives for the family reality stars have yet to comment on the cancellation report.