Rod Stewart and Ronnie Wood got writers' block when they tried to compose a song together and had to rely on some strong alcohol for inspiration. 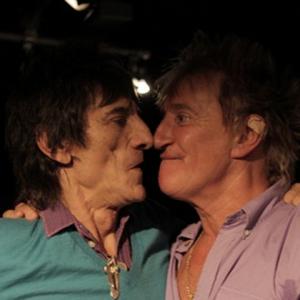 Rod Stewart and Ronnie Wood got writers' block when they tried to compose a song together.

The 'Maggie May' singer and the Rolling Stones star teamed up at Ronnie's mum's house in 1969 to write a song but admit it took a while before their creative juices started flowing.

Rod told Ronnie on Absolute Classic Rock: "I do recall a night of writing songs round your old mom's house, do you remember that, when we said we'd get together and try and write songs, we just sat there for hours with a pencil and paper and nothing happened?

"It was at 8 Whitethorn Avenue and we had a glass of wine and still nothing happened."

However, the former Faces bandmates soon managed to get some inspiration after some stronger alcohol and came up with the song 'Spanish Boots'.

Ronnie recalled: "Yeah, well I think we maybe had something stronger and then we got inspiration for a song called Spanish Boots. We've no idea why this came about, but is it the end of this one where I have a bass solo?"

Tune in for the full interview on Friday night (24.06.11) on Absolute Classic Rock at 8pm.