He was awarded the honour at Buckingham Palace this week.

Rod Stewart has finally landed his long-deserved knighthood in a ceremony at Buckingham Palace today (October 11th 2016). He was honoured by the Duke of Cambridge, after being named in Queen Elizabeth's 90th Birthday Honours list in June for his services to music and to charity. 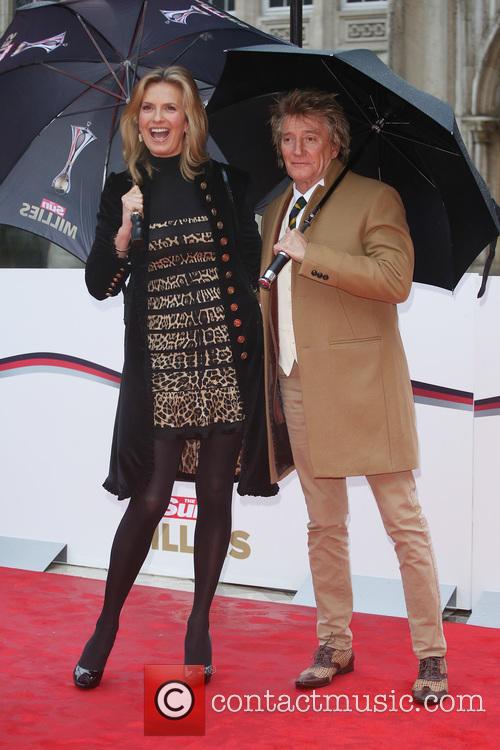 Sir Rod Stewart was given his new moniker by the Duke, aka Prince William, aka the future King of England. He was dressed in his own version of royal-meeting attire, complete with tartan pants and a military-style jacket with gold buttons, a red collar and red cuffs. The 71-year-old was accompanied by his wife of 8 years Penny Lancaster and their sons Aiden, 5, and Alastair, 10.

'We talked about music and he said: 'It's great that you're still going', and I said: 'I have to - I've got eight children!'' Rod told the BBC. 'He congratulated me on my long career - and I said how happy this made me. I just wish my mum and dad had been here to see it.'

The honour joins Rod's many awards over the years, including a Grammy, a Brit Award, the first ever Diamond Award from the World Music Awards, a star on the Hollywood Walk of Fame and an induction into the Rock and Roll Hall of Fame. In 2007, he was awarded a CBE (Commander of the Order of the British Empire) in the New Year Honours, but has obviously now superceded that with his Knight Bachelor appointment.

Having sold more than 100 million records worldwide, Rod Stewart is best known for hits such as 'Maggie May', 'Sailing', 'I Don't Want to Talk About It' and 'Da Ya Think I'm Sexy?', as well as for fronting the 70s band Faces. However, his philanthropy over the years is undeniable, particularly in regards to his work with cancer charity The City of Hope Foundation and the Prince's Trust founded by Prince Charles for disadvantaged young people.