Rod Stewart's son Sean was arrested in Los Angeles yesterday (19.10.10) after police discovered he had an outstanding warrant for driving on a suspended licence. 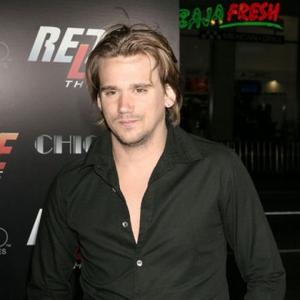 Sean Stewart, 30, was pulled over in San Fernando Valley for a minor traffic violation before police discovered he had an outstanding warrant for driving on a suspended licence.

According to TMZ.com, he was taken to a Beverly Hills jail where he was booked at 4:33pm before posting bail of $40,000 and being released before 9pm.

This isn't the first time Sean has been in trouble with The Police.

In 2008, the reformed drug addict - who has appeared on the US reality TV show 'Celebrity Rehab' - was accused of stealing his ex-girlfriend's car after their relationship ended.

In the same year he faced assault charges following claims he attacked a couple with bricks after being denied entrance to a Hollywood party.

In 2002, he was jailed for 90 days after attacking a man outside a nightclub.

Sean and his sister Kimberly, 31, are Rod's children with his first wife Alana Hamilton.

He also has a daughter Ruby, 23, by model Kelly Emberg and Renee, 18, and Liam, 16, by his second wife Rachel Hunter. He raises four-year-old son Alistair with wife Penny Lancaster, who is currently pregnant with the couple's second child.

His eldest daughter, Sarah, 46, was born when he was 19 and was brought up in a children's home until she was four, before being adopted.