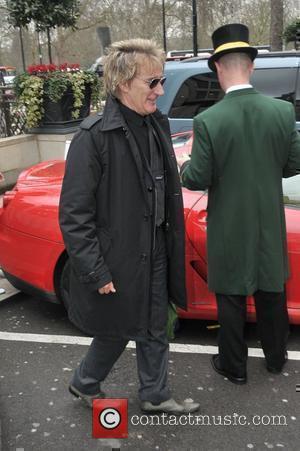 Rod Stewart has become a father for the eighth time, after his wife Penny Lancaster gave birth to a baby-boy yesterday (16th February 2011).
ROD STEWART, the British singer and former frontman of THE FACES, has become a father for the eighth time at the age of 66, reports BBC News.Stewart's son Aiden was born yesterday and weighed 7lb 12oz. A statement released on the couple's behalf said that the pair were both "proud and thrilled" and that both mother and child were healthy. Aiden is Stewart and Lancaster's second child, and joins 5-year-old Alastair. The statement read, "After the long-awaited arrival of their second child, Rod and Penny are proud and thrilled to welcome Alastair's baby brother, Aiden, into the world. Mother and baby are healthy and blissfully happy". The couple have made no secret of their problems with conceiving naturally and 39-year-old Lancaster became pregnant after a third cycle of IVF treatment.
The couple, who have been together for over a decade, married in Italy in 2007. Stewart has a son and daughter with his first wife ALANA HAMILTON and a daughter with the model KELLY EMBERG. The singer's marriage to Rachel Hunter produced two children, and he also had a daughter in the early 1960's, who was adopted into another family.