Rocker Rod Stewart Has Promised Fans He Will Do All He Can To Organise More Shows With His Old Band Faces Following Their Reunion At A Charity Concert On Saturday (05sep15). 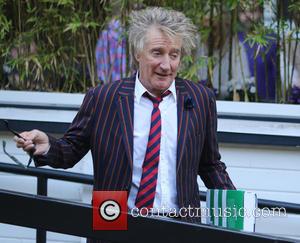 The Maggie May singer joined the Stay With Me hitmakers for their first proper gig in four decades to headline bandmate Kenney Jones' Prostate Cancer benefit in England.

Stewart was previously unable to join Faces' 2011 reunion due to other work commitments, but he has now vowed to liaise with guitarist Ronnie Wood to find a "window" in their busy schedules for more shows.

During an interview on U.K. TV show Loose Women on Wednesday (09Sep15), Stewart told the audience, "Now it's down to whether Ronnie and I can find a window of opportunity to (do it again), 'cos he's got the Stones and I've got my career, but keep the faith - we'll do it!"

Stewart appeared on the programme alongside his wife Penny Lancaster, who is a panellist on the chat show, and during his fun-filled 40-minute interview he handed out chocolate cookies to the presenters, judged a Rod Stewart lookalike competition, was serenaded by three bagpipe players, and chatted with his sister Mary as she sat among the studio audience.

He also chuckled as a letter from a girl he once dated at school was read out, and joked, "Is there a picture of what she looks like nowadays?"