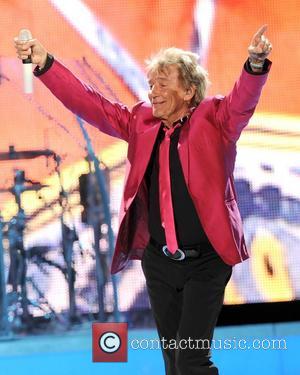 Rod Stewart battled a secret addiction to prescription drugs after he took steroids to help his voice and began a downward spiral which ended in a terrifying health scare.

The veteran singer admits he began taking steroids in the late 1980s after problems with his throat began to affect his voice, and in the following years he injected a "cocktail of drugs in a syringe" before every show.

In an extract from his book, Rod: The Autobiography, which has been serialised in Britain's Daily Mail, he writes, "As the eighties wore into the nineties, I faced an increasing struggle with my voice... More and more shows had to be wiped out. It got to the point where I was virtually uninsurable... I’d walk around feeling as though I’d been gargling barbed wire... I started taking steroids. Prednisone tablets, to be precise, and soon I was well on my way to developing an addiction. By... March 1991, I’d graduated to a cocktail of drugs in a syringe which I’d inject before a show, normally into my hand."

The star experienced nasty side-effects and the drugs started affecting his behaviour and his appearance: "I grew aggressive and impatient. Some may have thought this was typical diva behaviour, but it definitely had a new steroidal edge. Also, I began to fatten up. Not only are you steamingly hungry, you retain fluids and your cheeks go all hamster-like."

Stewart didn't address his problem until he suffered a ruptured stomach lining during a show and needed urgent medical treatment: "The steroid cocktail stopped working. Although I hadn’t eaten, I gobbled down some cortisone tablets, which need to be taken on a full stomach. While I was on stage, my stomach lining ruptured and I started bleeding internally. Then I began to hallucinate... The next thing I knew, the insurance company’s doctor was tending to me."

He eventually solved the problem with his throat by adopting an in-ear monitor which stopped him straining his voice on stage, and he credits the device with saving his career.

Stewart adds, "Technology intervened in the shape of an in-ear monitor...The effect was transformative: I could hear myself, I no longer had to roar quite so ferociously, my voice recovered – and the cancellations tapered off. In fact, without them, I’d have been finished as a live performer 20 years ago."