Night At The Museum: Secret Of The Tomb Cast Pays Tribute To "Integral" Robin Williams

Ricky Gervais and Ben Stiller have paid tribute to their late co-star.

The cast of Night At The Museum: Secret of the Tomb has paid tribute to cast member Robin Williams who died earlier this year. Speaking to People Magazine, the film’s stars celebrated the life and performance of their late co-star whose suicide in August devastated Hollywood. 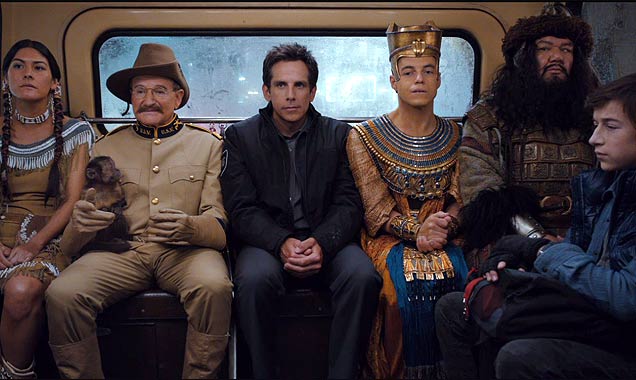 Robin Williams and the cast of Night at the Museum: Secret of the Tomb

In what would be one of his final film appearances Williams reprised his role of President Theodore Roosevelt in the third instalment of the comedy franchise.

"He was an amazing performer – an icon before I met him, then a friend," Ricky Gervais told People magazine. "I haven't met anyone who has a bad word to say about him. He was just [a] lovely, generous, sweet man.”

More: Night At The Museum: Secret Of The Tomb Bids Farewell To Robin Williams

Co-star Ben Stiller told the magazine he believed it was Williams’ involvement in the films which had made the franchise so successful. "I remember when the first movie happened, and Shawn [Levy, the director] said he wanted to ask Robin to play Teddy Roosevelt, and I was like, 'Oh my God, that's the most brilliant idea in the world. We can't do the movie if he doesn't say yes,' “Stiller said. "That's really how we always felt, so he's an integral part of this."

Levy, who has directed and produced all three films added, "It's sad of course, [but] I'm also excited for people to celebrate this guy and his amazing performance." The director also said Williams was always making people laugh on set recalling, "My personal favourite was the joy it gave Robin to make Ben Stiller crack up. That was always really cute and sweet."

More: Read Our Review Of Night at the Museum: Secret of the Tomb

Williams also endeared himself to his young co-stars especially 18 year old Skyler Gisondo who nearly missed out on his prom because of filming commitments. Williams, along with Stiller helped act out a skit for the actor which he had written to record and ask his then-girlfriend to the dance (she said yes, of course).

"I feel so lucky to be able to work with him when I did. I learned things from working with Robin I'll carry with me for the rest of my life," Gisondo said. "We all miss him very much … A guy like that has an impact on people for the rest of their lives in film." Williams reprises his role as Theodore Roosevelt in the third instalment of the franchise.

Night at the Museum: Secret Of The Tomb is currently showing in cinemas.