Robin Thicke To Receive 'R.E.S.P.E.C.T' Voucher As He Wins Sexist Of The Year

The Sexist of the Year title has been given to Robin Thicke this year, for promoting female degradation with 'Blurred Lines'.

Robin Thicke has won the title of Sexist Of The Year by the End Violence Against Women Coalition after his hit single 'Blurred Lines' was accused of glamorising rape culture.

He may have become a worldwide number one sensation with the track, but it's probably won Thicke a lot more critics than supporters as, ever since its release, people have blasted the song for its vile and degrading lyrics and, of course, the explicit accompanying video. The End Violence Against Women Coalition are thus sending the singer a voucher for the download of Aretha Franklin's 'R.E.S.P.E.C.T' to congratulate him and attempt to invite him to change his sexist ways.

The song; which features vomit-worthy lyrics such as 'I hate these blurred lines/ I know you want it', 'The way you grab me/ Must wanna get nasty' and 'I'll give you something big enough to tear your a** in two'; has been the subject of much heavy discussion, with Thicke himself doing his best to defend the tune which features T.I. and Pharrell Williams. 'People say, 'Hey, do you think this is degrading to women?' I'm like, 'Of course it is. What a pleasure it is to degrade a woman. I've never gotten to do that before', he told GQ, in what appeared to be a rather clumsy attempt at a joke before insisting, 'I've always respected women.'

Sarah Green of the Coalition issued a statement on the website offering her 'heartfelt congratulations to a worthy winner Robin Thicke for both his concerted sexist efforts, and in the end the platform he created for rejection of the use of women as objects to promote mediocre pop'. 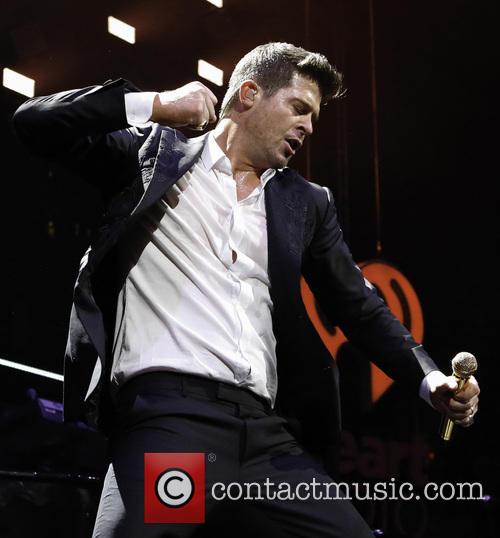 Thicke insists he does respect women