Robin Thicke Opens Up About Split Form Wife Paula Patton: "I'm Just Trying To Get Her Back"

The 'Blurred Lines' singer isn't accepting his marirage is over just yet, and is intent on reconciling with Paula Patton. 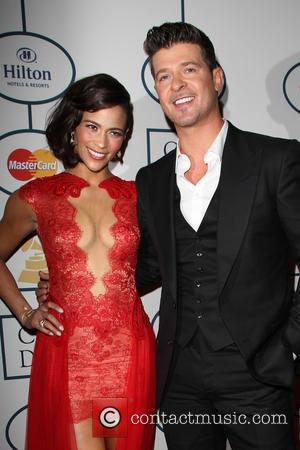 Robin Thicke and wife Paula Patton announced that their marriage was over this past Monday (Feb 24th).

But it seems the 37 year-old singer isn't accepting defeat just yet.

Although Thicke is currently experiencing some difficult personal issues, this didn't stop TMZ probing him with questions about the state of his marriage.

The 'Blurred Lines' singer quickly said, "I'm just trying to get her back, man," to the photographer after been asked whether or not the pair's marriage is repairable.

Patton and Thicke were married for eight years, and met during their high school years at aged 14. They spent more than 20 years together.

The high school sweethearts released a joint statement regarding their split, which read, "We will always love each other and be best friends, however, we have mutually decided to separate at this time."

But from what Robin said to the gossip site, a 'mutual decision' doesn't seem to be accurate.

In the midst of their split, the 'Lost Without U' singer cancelled one of his shows scheduled for Tuesday (Feb 25th), at the Harrah's Cherokee Casino Resort in North Carolina.

On Wednesday (Feb 26th) he took to his own website to address fans on the tours current status, and thanked them for their continued support.

"I want to thank everyone for the well wishes these last few days. My fans mean everything to me," Thicke wrote. "I'm looking forward to getting back on out on the road and performing in Washington DC this Thursday, and the rest of the tour."

"Looking forward to seeing everyone out there!" he added.

The couple have reportedly been on the rocks ever since the Los Angeles native's infamous performance at last summer's MTV VMA awards, in which Robin let Miley Cyrus grind inappropriately on his crotch area.

"The Miley Cyrus fiasco was a big test of their relationship," an insider told Us Weekly.