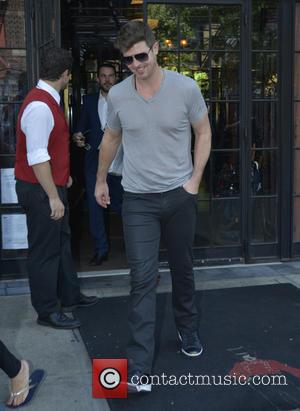 R&B star Robin Thicke is determined to continue breaking boundaries in music by recording a country and a gospel album following the success of his crossover hit Blurred Lines.

The singer has tasted huge mainstream success with the catchy summer (13) single and scored a U.S. chart double this week (begs05Aug13) as his album, also called Blurred Lines, debuted at the top of the Billboard 200, giving him his first American number one record.

Now Thicke is keen to get back into the studio to capitalise on his widespread popularity - and he's even plotting a festive project too.

He tells the Associated Press, "I did want to push the boundaries and work with some hitmakers (on the new album) to see if they could help me (score a big hit) and luckily it all worked out...

"I want to get right in the studio. I want to make a country album, a Christmas album, a gospel album. I'm like, 'Finally!' I'm ready to make four albums right now."