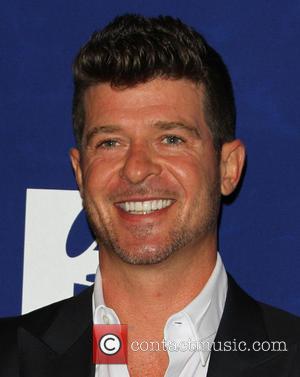 Picture: Robin Thicke - A host of celebrities were out in number to attend the 17th Annual Grammy Foundation Legacy Concert 'Lean On Me: A Celebration...

Robin Thicke's hit Blurred Lines earned the singer over $5.6 million (Gbp3.7 million) as part of a split of the $16.6 million (Gbp11 million) profits from the 2013 hit, according to court documents related to an ongoing copyright battle.

The financial details linked to the song were disclosed in court on Monday (02Mar15) as the second week of Thicke and partners T.I. and Pharrell Williams', showdown with Marvin Gaye's kids got underway in Los Angeles.

The soul legend's children claim the trio heavily sampled their father's 1977 hit Got To Give It Up, and they are demanding damages and full accreditation.

As the Blurred Lines trial resumed, jurors were given a look behind the scenes of the music industry as financial details were revealed.

Gaye's kids insist they are entitled to a large portion of the profits because the song is an alleged copyright infringement of Got to Give It Up.

The late singer's children, Frankie and Nona Gaye, also claim they are entitled to money Thicke picked up from touring on the back of his hit.