The 37 year-old singer reached so many career highs in 2013, but his newfound fame status was hard to handle: "You don't know how to juggle it, you know. And all of a sudden, the balls are all over the floor." 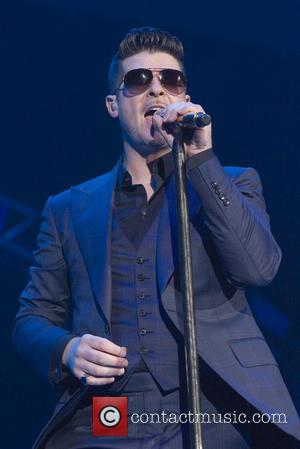 2013 was the year Robin Thicke finally became a huge name in the music industry, but along with his rise to stardom was a huge amount of criticism.

The 37 year-old singer dominated the charts last year with one hit song, 'Blurred Lines,' but along with the suggestive lyrics and raunchy music video, he was subjected to harsh backlash from the public.

To further tarnish his image, Thicke also caused controversy when performing at the 2013 MTV VMA's with Miley Cyrus, which saw the 21 year-old singer bent over, grinding on his groin in a very proactive manner.

In present day, Thicke can only reflect on these issues, which he did do when talking with 'CBS Sunday Morning' in an interview set to air on July 6th, while promoting his latest album 'Paula,' aptly named after his estranged wife Paula Patton.

The 'Give It 2 U' singer split with the actress this past February, but ever since he has been on a public mission to win back his wife of eight years.

"I saw a guy who needed to be humbled a little bit," Thicke told CBS Sunday Morning, when asked about the huge 'Blurred Lines' backlash. "Because I think you strive for so long for an accomplishment like what happened last year, and then you get it. And then you don't know how to juggle it, you know. And all of a sudden, the balls are all over the floor."

This new admission comes after Thicke initially defended the song that many felt promoted sexual violence, he claimed it illustrated men and women as equals.

"If you listen to the lyrics, it says 'That man is not your maker'-it's actually a feminist movement in itself," he told NBC's Today Show in July 2013. "It's saying that women and men are equals, as animals and ... in power. It doesn't matter if you're a good girl or a bad girl-you can still have a good time."

It seems Thicke may have had a change of heart, which is definitely the case with his and Cyrus' infamous VMA performance. The star told 'CBS Sunday Moring' that he has never seen a reply of their collaboration.