Singer Robin Thicke Regrets Selling The Album He Dedicated To His Ex-wife Paula Patton, Insisting He Should Have Given It Away For Free. 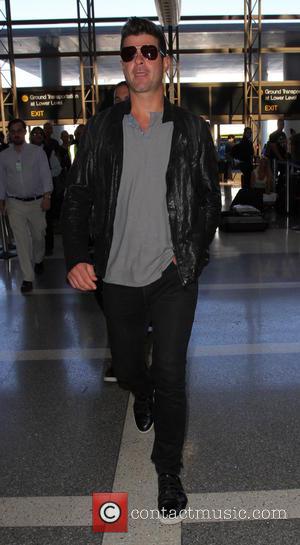 The Mission: Impossible - Ghost Protocol beauty separated from Thicke in early 2014, after almost nine years of marriage, and he then spent months publicly pleading with his high school sweetheart to take him back, even naming the album he subsequently released, Paula, after her, but Patton shunned a reunion and they officially divorced.

Thicke and Patton, who are parents to son Julian Fuego, remain on a good terms, and while the singer insists he has no regrets about his public love pleas, he regrets asking fans to pay for the flop album.

"As an artist I have no regrets because as a writer you write what you feel, you have to express yourself and give it away," he says, "But, as an entertainer, I felt like I should have just given it away for free instead of promote it or make it part of my entertainer's process.

"I feel like it was so pure and personal that if I just would have given it away then it would have kept the purity of the feeling."

Thicke released the album last year (14) to a critical mauling and as a result it failed to set the charts on fire.

"I came right off a tour and I had all these songs and all these ideas and feelings in my heart and I went right into the studio," he recalls. "I wrote all the songs in about three weeks and we recorded the album in about a month.

"Obviously all the songs were about her or about how I feel about her. A lot of songwriters have done this kind of thing before. They won't tell you in the title or they'll be suggestive. I was just like, 'There's no reason to hide who this is about'. It's all about her."