Robin Thicke giving up on Paula?

Robin Thicke and Paula Patton have put their Los Angeles home on the market after his reconciliation attempts appear to have failed. 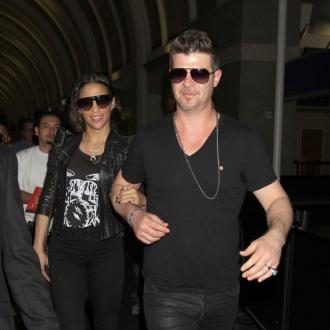 Robin Thicke's efforts to win back his estranged wife Paula Patton don't appear to have worked with the couple now putting their LA home up for sale.

The 'Blurred Lines' singer and the 'Baggage Claim' actress - who have been together for almost 20 years and married for eight - split in February amid reports he had cheated on her.

And now they have put their exclusive Bird Street three bedroom, three-and-a-half bathroom home, which was first bought by Robin's father Alan Thicke in the 1990s and gifted to the couple in 2005 after their wedding, up for sale for almost three million dollars.

A pool, spa and courtyard are included with the property, which has impressive views of Downtown LA and celebrities who own homes in the area include Jennifer Aniston and Michael Buble.

The decision to put the house on the market comes after many embarrassing attempts by Robin, 37, to win back his spouse, including naming his latest album 'Paula' and making many public pleas for a reconciliation.

However, the singer - who has a four-year-old son Julian with the 38-year-old actress - recently admitted his efforts to win her back may not be working.

He said: ''I actually have no idea what I'm doing. I'm just kinda flying by the seat of my pants on this one.''