Robin Thicke often gets heckled in the street by people shouting ''Simon'' at him because they think he looks like Simon Cowell. 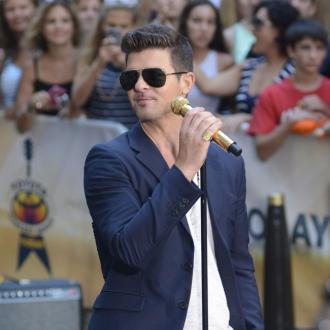 Robin Thicke regularly gets mistaken for being Simon Cowell.

The 36-year-old singer - who is 18 years younger than the 'X Factor' boss - often gets heckled in the street by people shouting ''Simon'' at him because they think he is the music mogul due to their similar haircuts.

He said: ''I went through a hippy phase when I started out in music and said I would not cut my hair until I heard my song played on the radio. Now I do get called Simon Cowell because of my hair.''

Robin recently hit the headlines following his performance of 'Blurred Lines' at the MTV Video Music Awards (VMAs) with Miley Cyrus, during which the 19-year-old pop princess 'twerked' and gyrated against him while wearing a nude-coloured latex bikini.

The soul singer - who is married to actress Paula Patton - insists the routine was just a bit of fun and there was no sexual element to it, despite the criticism the pair received.

He explained: ''There was no sexuality between us. It was fun. It would have been different if it had been Rihanna.''

Several commentators have blasted Robin and Pharrell Williams' lyrics in 'Blurred Lines', claiming they glamorise sexual violence, but the 'Give It 2 U' hitmaker insists the pair wrote the song to make people ''happy''.

Speaking on 'Alan Carr: Chatty Man', which will air on Channel 4 tonight (08.11.13), he explained: ''When we wrote it Pharrell and I just wanted to be like how people talk to each other on the dance floor.

''When you read it back you can see why some people took it the wrong way, but our intentions were purely to make people happy.''