Robin Thicke Lied about Writing 'Blurred Lines', "I Was High and Drunk"

Robin Thicke concedes that he wrote almost none of 'Blurred Lines' and that his claims otherwise were down to drugs and alcohol.

Robin Thicke says he was "high and drunk" during every interview he gave in 2013 and concedes that he had almost no hand in writing the smash hit single 'Blurred Lines', despite receiving around 20% of the royalties. 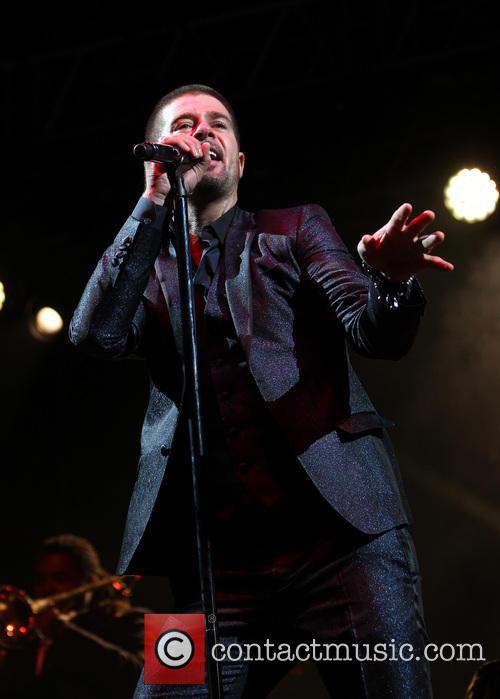 Robin Thicke has almost no hand in writing 'Blurred Lines'

Thicke, who has suffered a monumental fall from grace, has originally claimed he had co-written the song with Pharrell Williams but when testifying under oath as part of a plagiarism lawsuit, Thicke insisted Williams "geniused the whole [song]"

"The record would have happened with or without me," Thicke explained in documents obtained by the Hollywood Reporter. "None of it was my idea ... I was drunk ... [and] I'd say 75 percent of it was already done when I walked in."

"I was high and drunk every time I did an interview last year," he added, "Every day I woke up, I would take a Vicodin to start the day and then I would fill up a water bottle with vodka and drink it before and during my interviews.When your wife leaves you, it gives you good reason to sober up," he said.

The comments came about as part of court depositions recorded in April, with both Thicke and Williams speaking to lawyers representing the family of Marvin Gaye, who are suing the creators of 'Blurred Lines' for allegedly copying the soul singer's 1977 single 'Got To Give It Up'.

In earlier interviews, Thicke implied that Blurred Lines was an attempt to recreate Gaye's song.

"I was like, 'Damn, we should make something like [Got To Give It Up], something with that groove,'" he told GQ in May 2013. "Then [Pharrell] started playing a little something and we literally wrote the song in about a half hour and recorded it."

However, now, Thicke claims he lied. "After making six albums that I wrote and produced myself, the biggest hit of my career was written and produced by somebody else and I was jealous and I wanted some of the credit," he said.

Williams too concedes that Thicke's only contribution was to suggest that the second verse include a falsetto part. "He didn't walk in and ask me for anything because he was late that day," he said.

Thicke attempted to win back his wife, the actress Paula Patton, was an album named after her. Written almost entirely by the singer, the LP sold 530 in the UK in its first week, and just 50 in Australia.