Robin Thicke debuted a new song, 'Get Her Back', and thanked estranged wife Paula Patton for her support at the Billboard Music Awards last night (18.05.14). 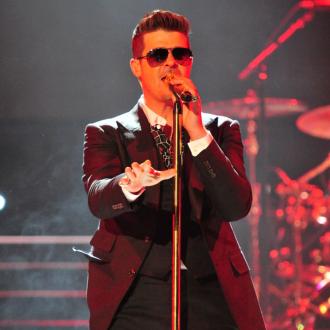 Robin Thicke made a public appeal to win back Paula Patton at the Billboard Music Awards last night (18.05.14).

The 37-year-old singer debuted a new song, 'Get Her Back', at the star-studded ceremony and he not only seemed to dedicate the track to his estranged spouse - who he split from in February after nine years of marriage - but the lyrics appeared to be an apology for his past behaviour.

He told the audience at the MGM Grand Garden Arena in Las Vegas, Nevada:''All right, you got to help me try to get her back now.''

He then appeared tearful as he sang lines such as: ''I never should have raised my voice or made you feel so small...

''I should have kissed you longer, I should have held you stronger. I'll wait for forever for you to love me again.''

Towards the end of the performance, he asked the crowd to put their hands together, fell to his knees and sang: ''I gotta get her, I gotta get a girl tonight.''

Earlier in the evening, the 37-year-old star - who has four-year-old son Julian with the actress - thanked ''my wife'' as he picked up the award for Top R&B song for his track 'Blurred Lines'.

He said: ''Most importantly, I'd like to thank my wife for her love and support and for putting up with me all these years.''

Though the childhood sweethearts insisted their split was mutual, it has since been reported that it was Paula's decision and Robin has since been doing his best to persuade her to give their marriage another try.