Robin Thicke and Paula Patton have decided to split up after nine years together. 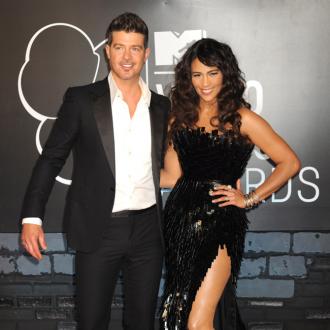 Robin Thicke and Paula Patton have split up.

The 'Blurred Lines' hitmaker and his wife - who have three-year-old son Julian together - have decided to go their separate ways after nine years together.

In a joint statement to People.com, they said: ''We will always love each other and be best friends, however, we have mutually decided to separate at this time.''

The couple first met when they were teenagers and tied the knot in 2005.

The split comes just weeks after Robin was seen dancing closely with a mystery woman after a performance at Club 79 in Paris, France, in January.

In September last year another woman, Lana Scolaro, claimed Robin had kissed her at a party in New York, before a photograph emerged with him on Lana's bottom, reflected in a mirror.

She said: ''I went to the bathroom, and when I came out he was standing there ... He turned off the lights so no one could see us, and he started making out with me. He was grabbing me. He was like, 'I want to get you into bed' ... His hands were everywhere.''

Meanwhile, Paula previously said she and Robin argued a lot, but always remained committed to each other.

She said: ''Listen, we have fun, but like every couple, we have our ups and downs. Nothing is perfect, but we're very happy. He's my best friend.''