Robin Gibb has won his battle against colon and liver cancer according to his son, RJ. 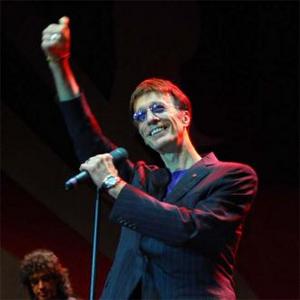 Robin Gibb's cancer is in remission.

The 62-year-old Bee Gees star has won his battle against liver and colon cancer, according to his delighted son Robin-John, known as RJ.

He learned of the news during a visit to see his father in hospital, when the iconic singer told him: ''It's gone, they can't see it no more. I've done it.''

The 29-year-old musician and actor said: ''I leant over the hospital bed and I kissed him on the forehead, looked him in the eyes and just said, 'I love you'.

''Then we sat together for ages, just taking it all in and being together without saying anything. It was the best news we could have hoped for.

''It was the most beautiful feeling and instantly life was so, so much better.''

But while he is out of the woods for now, Robin - whose twin brother Maurice died during surgery for a twisted colon in 2003 - knows the disease could return at any time.

His son told the Daily Mirror: ''If we can keep it at bay, sometimes people live with it for years but obviously we can never know precisely.

''Those trips to the hospital never stop. He will always have to keep going back for tests and check-ups, because of course this disease has a terrible habit of coming back.''

The 'Staying Alive' singer was diagnosed with the illness last year after suffering abdominal pain, and RJ reveals it took his father a while to come to terms with the condition.

He explained: ''We found out together. Obviously the news wasn't good. For a long time neither he nor I wanted to talk about it.

''He knew what he had, but he didn't want to delve into it or discuss it, even with his family.

''He [then] accepted he had a problem and slowly realised it was something he'd have to deal with, and that's when fortunately he was able to catch it in time.

''I can't imagine how scared he was deep down, but he always stayed so strong and resilient.''