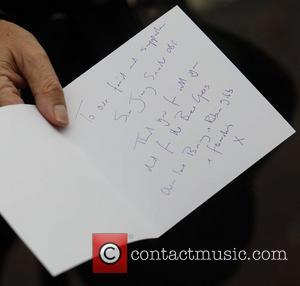 Ailing singer Robin Gibb is determined to overcome his health issues so he is fit enough to unveil a new war memorial in London.
The Bee Gees legend was rushed to hospital by ambulance last week (begs18Nov11) amid unsubstantiated reports he is battling liver cancer.
The star, who has appeared frail for several months, has not commented on the speculation, but his pal and fellow Bomber Command Memorial Fund campaigner, Jim Dooley, has appeared to confirm the rumours.
When asked about the singer's current condition, Dooley reveals Gibb is determined to overcome his illness and wants to be well enough to attend the unveiling of the World War II airmen tribute next year (12).
Dooley tells Britain's Daily Express, "I have nothing but admiration for Robin. He is fighting it.
"He is very optimistic. He wants to stand with me when the Bomber Command Memorial is unveiled on June 28 next year. It is so upsetting to see people you love suffering in the way that Robin is."
Gibb helped raise the $9 million (£5.6 million) needed to build the monument.