Metallica bassist Robert Trujillo has admitted the band are having ''fun'' creating their next album in lockdown. 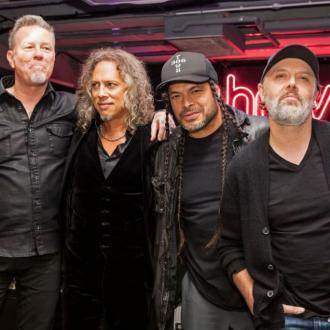 Robert Trujillo says Metallica are having ''fun'' coming up with new ideas for their next record.

The heavy metal legends' bassist has admitted it's been easier to work on new music remotely via Zoom during the coronavirus lockdown, because it's difficult to get all of the band in one place usually.

And this way, the 'Nothing Else Matters' rockers - completed by James Hetfield, Kirk Hammett and Lars Ulrich - have been able to speak more regularly to one another.

Robert said: ''We communicate every week, which is really great, so we have our connection intact. And what we've started doing is basically just really concentrating on our home studios and being creative from our homes and navigating through ideas and building on new ideas.

''We're excited about cultivating new ideas, to be honest. And everybody's in a good headspace, for the most part, and that's pretty much our focus now -- let's have fun with this. That's part of the reason I got some updated recording gear and I'm putting ideas together and we're checking kind of each other's vibes out on new stuff. And that's pretty much where we're at.''

Robert insisted another positive of working remotely is, once they do finally get back in the studio, they'll be ''40 steps ahead''.

He added to 'The Vinyl Guide' podcast: ''We're creating, and I think that is really cool, because sometimes it takes a while to get the band together, and get four individuals who are living in different places in the same room. But it's, like, 'Hey, guess what? We don't have to be in the same room right now.' We can make music from our homes and work together and build stuff - and then we'll get in that room together and we'll bang the stuff out, but we'll be 40 steps ahead.''

The 55-year-old musician's comments come after drummer Lars, 56, revealed their follow-up to 2016's 'Hardwired... to Self-Destruct' is already in ''good shape''.

He said: ''So far, at least the sonic side of it and the practical elements are in surprisingly good shape, actually.

''So now we've just gotta figure out how much we can create without being in the same space.''