It's a shame so few people see documentaries, and that so few politicians pay them any attention, because this film has the power to change the way we think about nuclear energy. It's an issue most of us have made up our minds about, but by carefully presenting the facts and unpicking the knotty controversies, filmmaker Stone finds real hope for the future. Whether anyone wants to listen is another question. 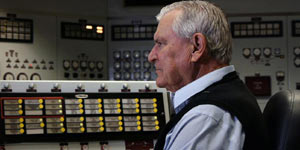 The central irony is that nuclear power has long been rejected by liberals and supported by conservatives, even though it's exactly the opposite for the environmental issues. The scientific truth is that nuclear technology is probably the only chance humanity has to avoid the worst results of man-made climate change, because it's by far the cleanest and safest way to produce energy. The problem is that everything we have been told has been misleading. And as the world needs to dramatically expand energy production, the only viable alternative to nuclear energy is burning coal and oil, which kills millions each year while irreversibly destroying the planet.

Using archive footage, graphics and well-spoken experts, Stone carefully debunks the false information we've always believed, most of it propagated by oil companies. Essentially: nuclear reactors don't produce waste, they recycle it; new reactors are incapable of melting down; and the radioactivity around a nuclear plant is actually far safer than on a trans-Atlantic flight. Travelling to trouble spots such as Fukushima, Chernobyl and Three Mile Island, Stone demonstrates that these historical old-technology accidents haven't left as much lingering radiation as we thought.

By Rich Cline
Good
Robert Redford revisits the Lincoln assassination with this earnest historical drama. Being a relatively obscure chapter of American history, the story is pretty fascinating, although the film is so parched that it rarely comes alive.

After the President is murdered in 1865, inexperienced lawyer Frederick (McAvoy) is assigned to defend Mary Surratt (Wright), who is charged with conspiracy alongside eight others. As a war hero from the North, Frederick is horrified to get this job, but is convinced by his boss (Wilkinson) that she at least deserves a fair trial. Of course, in the hysteria following the war and assassination, that's not likely. The judge (Meaney) clearly takes sides, the prosecutor (Huston) is relentlessly arrogant and the war secretary (Kline) has already decided on a verdict and sentence.

It's a shame so few people see documentaries, and that so few politicians pay them...