Robert Redford Compares 'All Is Lost' With 1972 Western 'Jeremiah Johnson'

Robert Redford thinks 'All Is Lost' is a similar demonstration of the human survival instinct to his 70s adventure flick 'Jeremiah Johnson'. 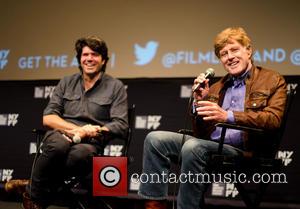 Robert Redford sure showed spirit and hardiness on the set of his ocean drama 'All Is Lost' just like his character, but the Oscar winner thinks Our Man has the same in common with a previous movie role.

The 'Butch Cassidy and the Sundance Kid' star commented on how his new movie - in which he is the sole, virtually unspeaking character trapped in the middle of the Pacific Ocean on a sinking boat - is a great homage to the strength and survival instinct of mankind when in hopeless crises. 'This character keeps going to a point when some people would give up and say, 'It's too much. I'm out in the middle of nowhere'', he explains. ''No one is here to help me and it seems like I've done everything I possibly can. Why not give up?''

Redford pondered a previous project in regards to the perseverance of human beings; his 1972 western epic 'Jeremiah Johnson' in which he played the title character, a lonely mountain dweller who winds up being hunted by a savage tribe. 'He had a choice to give up or continue but he continues, because that's all there is', he says, making the comparison. 'And ['All Is Lost'], I think, suggests the same thing. He just goes on because that's all he can do.'

The Sundance Film Festival founder makes himself the perfect choice for these determined characters, taking on the physical challenges of his films head-on - without the use of a stunt double. This movie sees him climbing up delicate yacht masts, wading underwater and being sprayed incessantly with water hoses in the stormy scenes, despite being 77-years-old and suffering various injuries because of it.

Watch the trailer for All Is Lost Redford has a similar view on determination as his characters The calm before the storm All Is Lost