While a microscopic budget and somewhat misguided premise create constant irritations, this British comedy has such a bone-dry sense of humour that it can't help but keep the audience laughing. It's also refreshing that someone is daring to laugh at the European football world, something most fans take far too seriously. Still, this mock-documentary is so thinly set out that it never digs too deep. And with only five actors and no match footage at all, it feels underdeveloped. 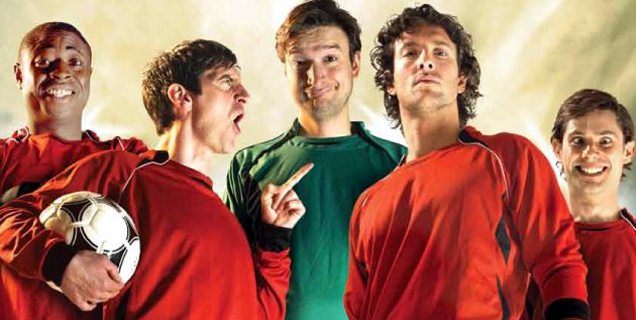 This is a fake documentary about a fake version of Manchester United, catching up with five players several years after they attempted to win the triple championship in 2010. As they speak to camera about each pivotal match, they reveal things about themselves. Pretty boy Olly (Jack Donnelly) is clearly less interested in playing football than in creating himself as a brand. Northerner Danny (Ryan Pope) has no idea what to do with all of his money, and still hasn't come to terms with the fact that he's gay. Practical joker Stevo (James Rastall) never has a clue when he's taken a prank too far. German goalkeeper Kurt (Jonathan Broke) thinks his system is flawless, and can't cope when it isn't. And womanising rapper Kwasi (Matthew Avery), who comes from Ghana, can't quite reconcile his Muslim religion with his excessive lifestyle.

It's fairly obvious why these clowns didn't win the triple; what's harder to understand is how they made it to the championship matches at all. Annoyingly, the pivotal moments from each game are only described verbally, and sometimes re-enacted among them. Not having a single frame of match-play is a serious problem for something pretending to be a documentary, but at least the actors give hilariously committed performances, making astute observations and playing off each other with often riotous results. There are also pointed comments from actors playing an obviously corrupt football official (Dana Haqjoo), a bigoted politician (Robery Portall) and a curvaceous assistant (Anouska Mond).

While a microscopic budget and somewhat misguided premise create constant irritations, this British comedy has...