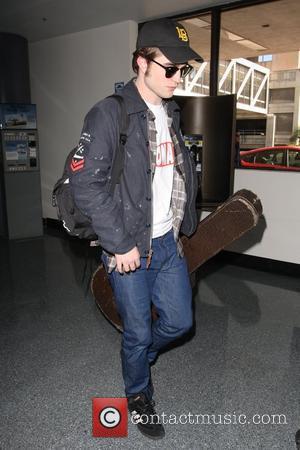 Picture: Robert Pattinson seen arriving at LAX on a flight from Vancouver where he has been filming Twilight. Los Angeles, USA - 01.05.10

Robert Pattinson needs 11 bodyguards to protect him from overzealous fans, according to TWILIGHT co-star Kellan Lutz.
The Brit was propelled to superstar status with his role as brooding bloodsucker Edward Cullen in the hit film franchise, and now he needs round-the-clock protection from fans, like the ones who started camping out in Los Angeles on Monday (21Jun10) just to catch a glimpse of the hunk at The Twilight Saga: Eclipse premiere four days later.
But castmate Lutz insists Pattinson is still the same guy he first met at the beginning of the Twilight rollercoaster - he just needs a little added protection.
The American tells Parade magazine, "We've all stayed so down to earth, and it's just funny to see life change for the people around us, especially Rob. It's like, when a fan lunges at him and you only see one bodyguard around, and then 10 more jump out of the crowd, where they've been hiding.
"God, it's crazy to think about needing a bodyguard, but Rob can't take any chances. He's a heartthrob, but he's also a great guy and we all love him because he hasn't changed as a person."