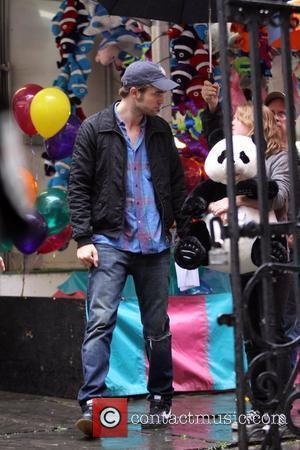 Picture: Robert Pattinson and Emilie de Ravin on the set of their new film 'Remember Me' shooting on location in Manhattan. New York City, USA -...

Production on Robert Pattinson's forthcoming movie REMEMBER ME was thrown into chaos on Wednesday (24Jun09) when firefighters rushed to the New York set to investigate a crumbling building.
The Twilight hunk is currently shooting the film in downtown Manhattan, but work was delayed when a crack in the wall of an old property nearby widened, setting off warning alarms placed to monitor the damage.
Five fire engines and a 20-strong crew of firefighters attended the scene to get the situation under control - and the disruption caused a number of problems for the film crew, which attempted to shoot around the commotion.
An on-set source tells OK magazine, "It's causing a hold-up for the shoot. We can't get anything in or out of here."
However, actor Pattinson refused to let the interruption interfere with his job.
An onlooker says, "Robert was concentrating on his scene. But most of the crew were staring nervously at the crack in the building and talking about whether it will fall down or not."