Robert Downey, Jr. Reconnected With Ex-girlfriend Sarah Jessica Parker Almost 30 Years After They Split In The 1980s After Telling New York Shock Jock Howard Stern He Was Planning To Ask Her Husband Matthew Broderick If It Was Ok For Them To Meet And Discuss Old Times. 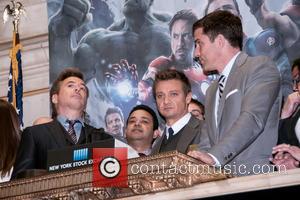 The Iron Man star romanced the Sex and the City beauty for seven years after they met on the set of their film Firstborn in 1984, and during a chat with Stern in October (14), Downey, Jr. confessed the relationship still meant a "big deal" to him, adding he would like to catch up with his ex and her husband Broderick.

Downey, Jr. said, "I’ll make a point of trying to see her while I’m here (in New York). I’d like to... I’ll ask his (Broderick) permission. I just want to check in for a few minutes. I love Matthew Broderick... I’d love to have him there. I’ll bring (my wife) Susan."

He said, "Private stuff aside, we were able to spend some time together and it was really cool. I went over to her place and then we went down the street... some tapas place on the corner with a friend of hers. You know, the funny thing too, is you always have a perception of somebody that you spent a big chunk of your life with and I think it's typical to the human thing that the further you get away from that in your new relationship, you (unintentionally) taint your perception of the person.

"Seeing her, I was like, 'She's so great and so cool and so funny and so in-command'. I got to meet her kids and I saw the way she and Matthew lived and I respect both of them so much... You have fresh eyes and you're actually willing to go to a deeper level of acceptance and kind of just make peace with the way life is."

And the actor insisted that he is happy and at peace with the way things worked out for both of them, adding, "Anytime I was in a relationship, I thought, 'You're gonna bury me next to this woman'. It's not that simple and God has other plans... I said everything I wanted to say. It's a little bit stilted but then there's this familiarity that overtakes it and you realise you're just in the presence of this fully mature mother and woman and artist and human being. There's enough good will left over, you didn't burn that bridge."

Since their split, Downey, Jr. has become father to three children from two marriages, while Parker has been married to Broderick since 1997. She's also a parent to three kids.