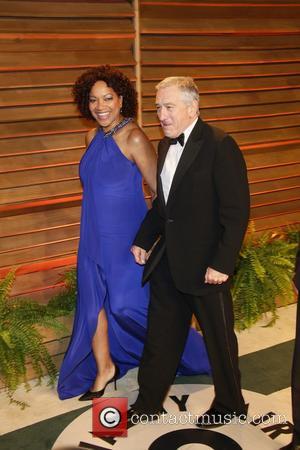 The 20th annual event attracted stars from movies, music and sports to the Phoenix, Arizona gala, which raises funds in support of the legendary boxer's fight to find a cure for Parkinson's disease.

The Raging Bull star was given the night's big prize, the 2014 Muhammad Ali Celebrity Fight Night Award, which was handed to De Niro by his Analyze This co-star Billy Crystal.

Singer Buble was also presented with the Muhammad Ali Humanitarian Award by country artist Reba MCEntire, who served as the host for the evening.

Ali himself was not able to attend his event due to a stomach bug, but other celebrities, including Sex and the City's John Corbett and politician Robert Kennedy, Jr., were on hand to support the cause.

Over $8 million (£4.8 million) was raised during the event, boosting the total raised in the 20 years of Celebrity Fight Night to $95 million (£56.8 million). Funds will benefit the Muhammad Ali Parkinson Center and Medical Center's Barrow Neurological Institute in Phoenix, as well as other charities.