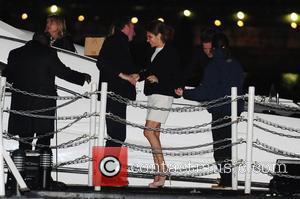 Fans of Robbie Williams are set to get a unique look into the singer's home life - his wife Ayda Field has reportedly been headhunted by producers of THE Real Housewives OF BEVERLY HILLS.
Williams, who last year (10) reunited with his Take That bandmates in preparation for a tour in May (11), wed Field in California last August (10).
The couple is currently residing in Beverly Hills - and bosses of the hit reality TV show want cameras to follow Field as she goes about her daily business for an upcoming season, according to the New York Daily News.
A source tells the publication that producers at the Bravo network have approached Field with an offer, and although she is yet to decide, it's "very likely" she will agree to take part.