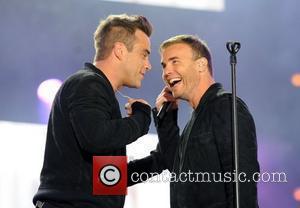 British singer Robbie Williams has shed light on his mystery illness - his lethargy is the result of a hormone imbalance.
The Take That star revealed earlier this year (10) that he had been battling an unknown sickness for the last four years, telling fans he feared his depression had returned when he started feeling low.
Williams started taking medication to improve his health when doctors pinpointed the problem, but he kept the details of his illness secret.
The Angels hitmaker has now revealed he was diagnosed with a hormone imbalance and is urging fans with similar symptoms to seek medical advice.
He tells Britain's The Sun, "If you are lethargic and your energy is a bit zapped and you find stuff difficult to do, I advise you to go and check your hormones. I did it by mistake and a few interesting things came up. It explained to me why everything seemed to be so much of a hassle for such a long time.
"You know, I didn't do anything for three years as I just didn't have the energy. I just thought this was who I was as a person, lethargic. You kind of, sort of, blame yourself for the drugs you have taken or the drink you have drunk - or expending the energy that maybe I didn't own when I was on stage or making physical cheques that I couldn't cash.
"Thanks to the grace of God, or whoever she is, I stumbled across the answer and I'm, like, 'Now I'm ready to go!' I'm absolutely rocking. Life is wonderful at the moment, personally and professionally."