Jonathan Wilkes' wife Nikki was also asked if she would take his best friend Robbie Williams to be her husband when the pair married. 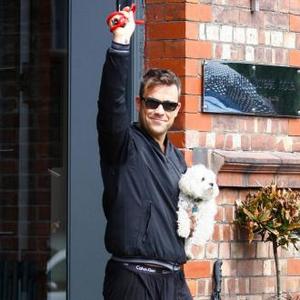 Robbie Williams was included in his best friend's wedding vows.

The 'Angels' hitmaker is very close to childhood pal Jonathan Wilkes and the singer's partner Nikki has always been resigned to the fact he would play a prominent role in their lives together.

Nikki said: ''There were always three of us in our relationship, we went everywhere together.

Jonathan added: ''Even at our wedding, our vicar said, 'Nikki, do you take Johnny and Robbie to be your lawful wedded husbands?!'

''We went on tour together in 2006 which was just mad, surreal and crazy. We had a ball and I got to see the world. I took Nikki and [my son] Mickey - he was just 16 weeks old and he'd been to nine countries! It was amazing.''

The 'She's The One' star now lives in Los Angeles with wife Ayda Field - who is pregnant with their first child - but Jonathan is still very close to his best friend and phones him every day.

He said: ''I'm very lucky, there aren't many people that I have special relationships with like that and we've been through thick and thin together.

''It's rare to have that, but I take it for granted at times and Rob would say the same, because people don't have friends from age four or five, but we're still strong and so close - he's my best mate.''