Robbie Williams and his wife Ayda Field are planning to start a family next year and have already picked out names for their kids. 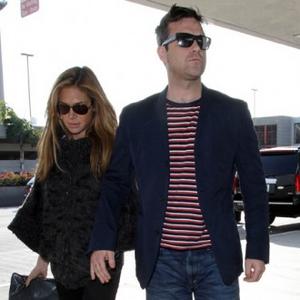 Robbie Williams wants to start a family next year.

The 'Angels' singer and his actress wife Ayda Field plans to have children are well underway and they have even picked out names for their prospective babies already.

He said: "She wants a football team. I want two. A boy and a girl.

"[We're going to call them] Woody and Sonny! Cool, eh? She wants to get on it now, but, I just got back off tour. There's a stretch from now until Christmas and then, we'll do some practising."

The 37-year-old star - who married Ayda in August 2010 - is glad he has waited until his late 30s to start a family, as he thinks it will make him a better father.

In an interview with The Times Magazine, he added: "I think up until now, with relationships, I've played it well. I waited till I was well into my thirties, I did what I needed to do, I got here without any kids. Now I'm a bit older, a bit more mature, kids will come."

Robbie admitted he has had problems committing to one woman in the past, and was initially worried he would cheat on Ayda, but after five years together, he is now sure their Bond is solid.

He added: "I haven't had to monogamise. I didn't want to be capable.

All the way through my twenties, I wanted someone who would fix me.

Then I wanted a maid. But I didn't even find them."

When asked if he was a good husband, Robbie replied he was and added: "I don't cheat on her. That's the main one. That was the main worry that I had."