Robbie Williams would love to make an album of duets with Gary Barlow but admits it would upset the rest of Take That. 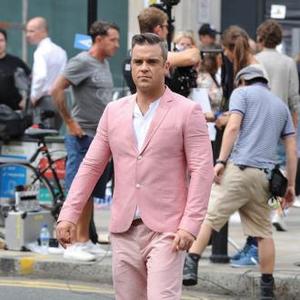 Robbie Williams wants to make an album of duets with Gary Barlow.

The 'Come Undone' hitmaker has co-written tracks with his Take That bandmate for his new solo album 'Take The Crown' and the pair previously released single 'Shame' but the singer would love for them to do a bigger venture, though he admits he doesn't think the rest of the group would be happy.

He said: ''I've written a couple of songs with Gaz [for the new album] but he's not singing on the album.

''I love working with Gaz. I'd love to do an album with him - me and him - but that wouldn't go down well with the boys, I don't think.

Robbie was previously linked with a judging role on 'The X Factor' before Gary landed the job and while he admits it is still an ambition of his, he would want to do it on his own terms.

He told GQ magazine: ''I could do it [judge a show] but I wouldn't want to.. Otherwise you're at the mercy of Simon Cowell or the head of BBC.

''You just wantch people come in and then be thrown off and I wouldn't like to put myself at the mercy of that. I'd like to own the show and not be able to be sacked.''