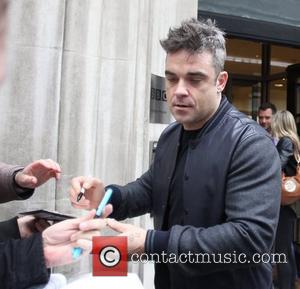 Robbie Williams is to appear as a guest mentor on X Factor this Saturday (October 27, 2012), before performing live on Sunday night's results show. Robbie, 38, acted as Gary Barlow's sidekick in the judges' house stage last year, though Cheryl Cole took over the role this year.

That hasn't stopped the Take That man getting involved on this year's show, and he'll be offering support and advice to contestants including Rylan Clark, Jade Ellis and Ella Henderson this weekend. Robbie has previously expressed his support for Clark, who has divided audiences on this year's show. Actually, he hasn't divided anyone, he's absolutely dreadful - though is getting votes for the comedy factor, clearly. Last week, Williams tweeted, "TEAM RYLAN ALL THE WAY VOTE RYLAN," with Barlow - who walked off the set when Rylan made it through after Week 1 - reacted, "20 years of knowing each other and it's all over in five letters."

Bookmakers are unconvinced that Rylan will be booted out this week, offering around 3/1 on him being given his marching orders. Christopher Maloney is available at similar odds, as is the frankly terrible Kye Sones.

It's also been announced that Robbie will turn on the Oxford Street Christmas lights this year, billed as "the UK's most spectacular and iconic Christmas Lights". The singer will be on hand to 'push the button' on Monday 5 November in an event hosted by retail store House of Fraser.

Just for fun, check out Robbie's X Factor performance with Olly Murs, from 2009.