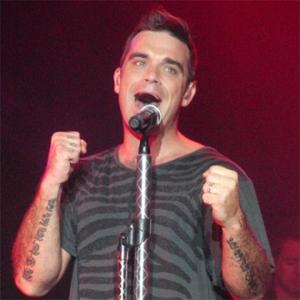 Robbie Williams shares his bed with his eight dogs.

The Take That singer - who is married to US actress Ayda Field - has even splashed out on a set of "doggy Steps" so his pooches Maggie, Wall-E, Rudy, Samantha, Sid, Duke, Poupette and Baby can reach the bed.

A source said: "The couple like sleeping with their pooches. Rob couldn't stand having them sleep in another room - or, worse, outside.

"But some of the dogs are quite small - the bichon frise pup, particularly - and Robbie's king-size bed is huge.

"It was too high up for them all to clamber up. So Rob bought a special, bespoke set of fake fur-lined doggy steps so they can make it up there safely. Now the whole family sleeps together."

Although Robbie and Ayda live in Los Angeles, the singer brought his dogs over to the UK for his band's recent tour because he couldn't bear to be parted from them for too long.

However, the dogs may soon have to share Robbie and Ayda as the 'Angels' hitmaker recently revealed the couple hope to have kids in the near future.

Explaining why he returned to touring and became more sociable, he said: "I'm going to be a dad... maybe next year or the year after and I don't want their dad to be emotionally inept, for my own well-being as well as theirs.

"At the start of the year, I got a feeling that 'things' can be different. It started as an ember and now because of the tour it's a furnace.

"In fact it started when we - as a couple - were kindly invited on holiday that was a once in a lifetime thing but it involved going with people we didn't know. My automatic reaction normally would have been, 'No, be safe, don't step out of your comfort zone' but then I thought of the kids we're yet to have and said, 'No f**k it, I want their dad to be able to do this sort of thing.' So I did. Things just snowballed from there."