Robbie Williams is reportedly planning an exhibition of his art work. 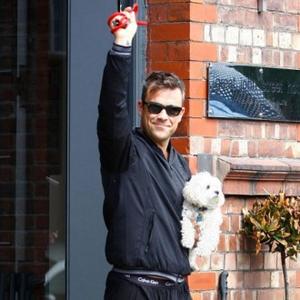 Robbie Williams is to host an exhibition of his art work.

The 37-year-old singer has turned the garage of his Los Angeles home into a studio and he is now planning to showcase his best paintings.

A source told the Daily Mirror newspaper: "His stuff has been getting better.

"I don't know if he plans to sell them, but I am sure they would fetch a good price.

"It would be something to talk about when people ask who'd done the painting on your lounge wall."

Robbie - who is married to actress Ayda Field - previously revealed he had taken up painting during preparations for Take That's 'Progress Live' tour last year.

He revealed on his blog: "I have been flying round the world on promo with the TT lads and loving it ... amazing. In our down time ... which hasn't been much, i found I really liked painting - of course I then had to turn my whole garage into 'art club' and got all my la mates into it too. (sic)"

The 'Angels' singer's wife, actress Ayda Field, has even discovered her artistic side since her husband started splashing his brush around.

He added: "Ayda did one too, I'll try and find that and show it to you."