Robbie Williams has revealed he once lost his pet cat to arch-rival Liam Gallagher when he split with former flame Nicole Appleton, who is now the Beady Eye singer's wife, and their pet feline went to live with the All Saints singer. 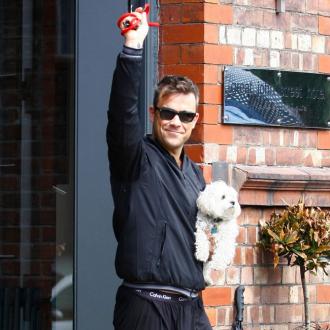 The 'Candy' hitmaker bought a feline when he was dating the Beady Eye singer's wife Nicole Appleton - who he was with for two years in the 90s - but the 39-year-old singer had to wave goodbye to the pussy, who they called Lady Our Kid, when the pair split in 1999 and she went to live with the All Saints star.

While Robbie admits at the time Nicole was in a better position to look after their four-legged friend, he is keen to purchase a moggy or two for his wife Ayda Field and their five-month-old daughter Theodora 'Teddy' Rose.

He told the Daily Mirror newspaper: ''I am now in my 40th year and I think it is time for a cat.

''I used to have one when I went out with Nicole Appleton from All Saints. We went to Harrods one day and bought one and called it Lady Our Kid. I wonder if she is still alive ...

''Nicole got her in the 'cat-vorce', which is best because at that point in time, she was more equipped to look after her. But now I think it may be time for a cat or two.''

However, it would not be the only furry friend in the couple's household as Robbie and Ayda have a collection of eight dogs.

Last year, Robbie - who was friends with Liam and Noel Gallagher in the 90s but later fell out with them when Noel called him the ''fat dancer from Take That'' - showed how much he cares for his pet pooches by splashing out more than £3,000 to transport them from the US to the UK via cruise liner.