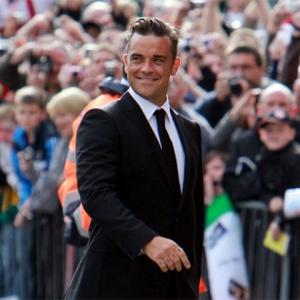 The Take That singer launched his menswear collection, Farrell - named after his grandfather Jack Farrell - at the city's flagship House of Fraser store, where he met with the first 200 fans to make a purchase from the range.

He also posed for pictures with his arms around mannequins adorned with key pieces from the collection.

Items in the range include checked shirts, scarves and coats and pieces are priced between £35 and £350.

Robbie - who was accompanied by wife Ayda Field on the promotional trip - collaborated with stylist Marcus Love and his hairstylist Oliver Woods on the collection.

This collection is the first of its kind designed by Robbie, who last year celebrated a successful 20 years in the music industry.

A source close to Robbie has previously said the collection has a "heritage feel combined with a modern style" as a homage to his late grandfather late Jack Farrell.

The source added at the time: "Robbie had an active role in the business."