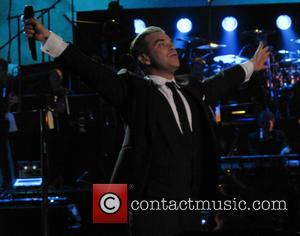 British singer Robbie Williams has reached out to his former fiancee Nicole Appleton following the reported breakdown of her marriage to Liam Gallagher, insisting she is a "sweetie" who deserves to be happy.

The state of Appleton's relationship with the ex-Oasis frontman has been at the centre of speculation since July (13) when it emerged the rocker is embroiled in a legal battle with an American journalist over claims he fathered her young daughter.

Gallagher is rumoured to have moved out of the couple's marital home in September (13).

Williams, who has endured a long-running feud with his one-time friend Gallagher, has now spoken out to offer his sympathies to Appleton, who he was engaged to in the late 1990s.

The Angels hitmaker tells Britain's The Sun, "I have a very big soft spot for Nic because she's a very decent person.

"I feel sorry for her as she deserves to be in a good place, in a happy marriage, and I thought she was with Liam. But it would appear that they weren't.

"Nicole really doesn't deserve all that from Liam. I've very, very fond memories of her. She's a sweetie."

Appleton began dating Gallagher in 2000, two years after breaking off her engagement to Williams. She married the rocker in 2008 and they share a son, Gene.