Robbie Williams has splashed out £30,000 on a black stencil graffiti canvas of a baby for his unborn daughter. 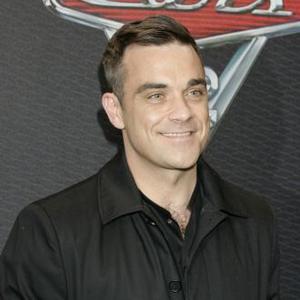 Robbie Williams has bought a £30,000 artwork for his unborn daughter.

The 38-year-old singer - who is expecting his first child with wife Ayda Field in September - splashed out on a black stencil graffiti canvas of a baby after falling ''in love'' with the piece, which he plans to put in his Los Angeles mansion ahead of the birth.

A source said: ''Robbie is really getting into his art. When he saw the baby painting he fell in love with it and wanted it for his girl.

''He can't wait to hang it in his LA mansion. He has nothing on his mind but baby thoughts just now.''

Robbie purchased the piece from street artist Bambi - who has been dubbed the female version of British graffiti artist Banksy - after his Take That bandmate Mark Owen bought a £20,000 painting from her for his 40th birthday in January.

A source added to the Daily Star newspaper: ''Robbie loved Mark's painting and knew he had to get in on the act.''

Robbie - who lives with Ayda and seven dogs - took up art as a hobby while preparing for Take That's 'Progress Live' tour last year, and he recently revealed he has commissioned paintings of his dead pooches with artwork depicting the canines in Tudor costumes.