Actor Rob Lowe Turned His New Tv Comedy The Grinder Into A Real Family Affair By Landing His Son A Role On The U.s. Show. 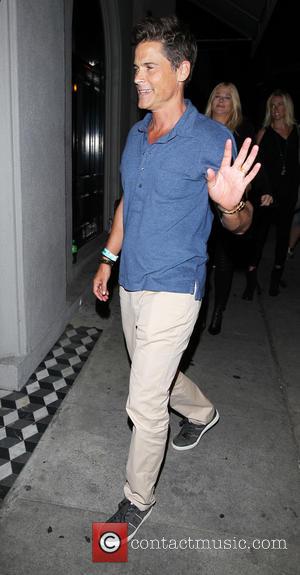 In the series, The West Wing star portrays an actor who returns to his family's real-life law firm to work after his TV legal drama is cancelled, and his second child, John, makes his acting debut in the project.

Rob admits he was proud to work alongside his boy.

"My younger son actually plays the neighbourhood boy that we're trying to keep my (onscreen) niece away from, so perfect casting," he laughs. "It was interesting (working with his son)."

However, Rob confesses he had a few reservations about introducing the 20 year old to the entertainment industry.

"The good news about it was that he was just like any other actor, which is what you want, and he's really, really good, but then (there were) all my fears of, 'Oh my God, I've created another actor, just what this world needs!'"

Having John on the set of The Grinder wasn't the only thing that reminded Rob of his family - the storyline also closely reflected aspects of his real life.

"My dad's 76, still practising (law) in Dayton, Ohio and my oldest son (Matthew) is applying to law school so it's sort of in my veins a little bit," he explains.

And Rob confesses he probably would have followed in his father's career footsteps if he hadn't found success in acting at a young age.

He quips, "Ironically I would have gone to law school!"

John and Matthew are Rob's children with his wife of 24 years, Sheryl Berkoff.