Actor Rob Lowe Is Adamant Suffering From Alcoholism Is A "Gift" That Has Helped Him Appreciate Life. 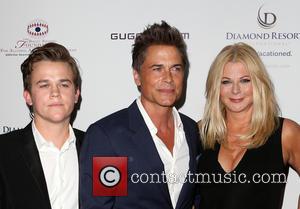 The West Wing star, who is celebrating 25 years of sobriety, insists recovering from his booze addiction has made him a better person.

He made the comments in a speech after being honoured with the Spirit of Sobriety award at the Brent Shapiro Foundation Summer Spectacular in Beverly Hills, California, on Saturday (12Sep15).

Lowe said, "Being in recovery has given me everything of value that I have in my life. Integrity, honesty, fearlessness, faith, a relationship with God, and most of all gratitude.

"It's given me a beautiful family and an amazing career. I'm under no illusions where I would be without the gift of alcoholism and the chance to recover from it."

Lowe also credited his wife Sheryl with supporting him through his ups and downs, adding, "She inspired me to get sober. She's put up with my defects of character as they call it... She's stood by through all of that. And I love you very much."