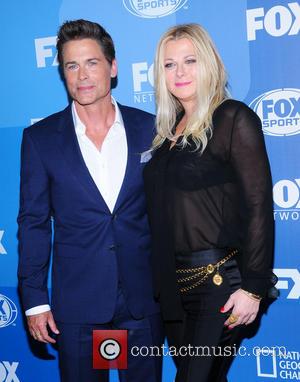 Picture: Rob Lowe and Sheryl Berkoff - A variety of celebrities were snapped as they attended Lifetime's Miniseries "The Secret Life Of Marilyn Monroe" Special Screening...

The Poison frontman took to his website to share a message of thanks to past and present military men and women, while he also uploaded a photo of himself on the old set of The Tonight Show with fellow guest Zamperini as part of his tribute to the late veteran, whose life story was the subject of Angelina Jolie's 2014 drama Unbroken.

Alongside the picture, Michaels writes, "On this Memorial Day, on behalf of myself and all at MEGI (Michaels Entertainment Group Inc.) we send our most sincere thank you in honor of the brave men and women of our armed forces for their ultimate sacrifice.

"I share with you this photo from when I performed on the Tonight Show with Jay Leno, Catherine Zeta-Jones and Louis Zamperini, who was a 1936 Berlin Olympian and World War II Prisoner Of War. With a long line of family members who have served this great nation and a military brat myself, meeting Mr. Zamperini was a true honor and inspiration. His life and heroism is featured in the movie Unbroken."

Michaels wasn't the only celebrity to take a moment of his time to salute veterans and current members of the Armed Forces - actor Rob Lowe took to Twitter.com to write, "My family's sincere thanks to all those who have sacrificed to serve our country, past present and future, while Smashing Pumpkins rocker Billy Corgan states: "Happy Memorial Day, everyone. Being here in DC, I'm reminded poignantly of the sacrifices that my ancestors who served made. Makes me proud".

The Avengers star Mark Ruffalo tweets, "In Memory of those who lost their lives to Warfare and the living who carry their grief", and Mark Wahlberg adds, "Today on #MemorialDay, we honor those who sacrificed their lives for our freedom. Our country stands tall on your shoulders. #NeverForget", while Arnold Schwarzenegger posts, "I'm grateful today and every day for our men and women in uniform and their families for making this country great."