Rob Kardashian vows to get in shape

Rob Kardashian plans to visit the gym every day in a bid to slim down again. 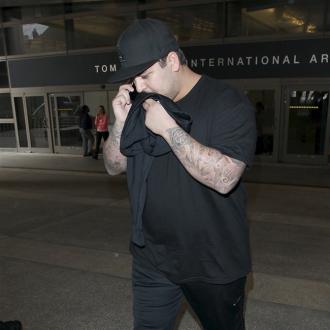 Rob Kardashian has vowed to hit the gym every day to lose weight.

The sock designer missed his sister Kim Kardashian's wedding to Kanye West at the weekend because he reportedly felt too self-conscious about his size to appear in photographs.

He's now had enough of being overweight and is determined to get back into shape.

Celebrity trainer Gunnar Peterson told TMZ he had received a text message from the reality TV star when he returned to Los Angeles from Florence, Italy, and is determined to ''hit the ground running'' with a new fitness regime and wants to work out every day until he feels slim again.

Rob previously lapsed his workouts and visited the gym just a few times before flying out to Europe, but is now determined to get into a regular routine.

Gunnar told the website he will show his client ''no mercy'' and plans to put him through an hour of high-intensity full body exercises, cardio and resistance training every day.

It was previously claimed the 27-year-old star - whose over-eating began following his break-up from Rita Ora in 2013 - allegedly got into an argument with Kim over her lavish wedding extravaganza, which he branded ''superficial bulls**t''.

Things kicked off between the siblings during a lunch at designer Valentino's Château de Wideville in Crespières, France, and Rob headed for the airport shortly afterwards.

An insider said: ''Rob is not in a good place right now at all and his family should be very worried about him. He was embarrassed to go to the wedding in the first place because of his weight gain and to be ridiculed by Kim and basically rejected has put him over the edge.''